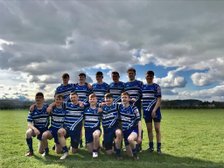 The Whitecraigs U18’s arrived in Dumfries in good spirits ready for a day of exciting rugby. There was a redraw of the groups before kick off as 4 teams had withdrawn from the event. They faced tough opponents in the first game against Currie Chieftains getting off to a great start winning 24-0 with some impressive play.

Next up was the hosts Dumfries Saints producing a tight match until our boys pulled ahead with a couple of late tries to wrap it up 32-24. The final group match was against Perthshire , who had also won their first 2 matches , with Perthshire winning 47-7 putting them through to the Final which they won beating West of Scotland 31-24.

We did however have a Whitecraigs player in the final, Struan Beaton who was the referee. Our U18’s went into a 3rd place Final with opponents Biggar again a high quality rugby display, with Biggar narrowly winning 29-26. Our boys finished in 4th place among a bunch of good teams.

A fun day out with some great rugby! Well Done.